There are so many special days that we can become immune to them. But when September 21 rolls around every year, it is important to tune in.

The International Day of Peace was initiated by the United Nations over 40 years ago and is observed around the world on September 21. The theme this year is “End Racism. Build Peace.”

Why such a Theme?

“Racism continues to poison institutions, social structures, and everyday life in every society. It continues to be a driver of persistent inequality. And it continues to deny people of their fundamental human rights. It destabilizes societies, undermines democracies and erodes the legitimacy of governments,” says António Guterres, United Nations Secretary General.

As people fled Ukraine, social media feeds became flooded with a deluge of reports highlighting the mistreatment and abuse of people of colour at the borders. Countless reports told the nasty tale of people of colour prevented from crossing borders while White Ukrainians were ushered to safety. Similarly, racism raised its ugly head during the pandemic. Anti-Asian rhetoric rose alongside COVID-19, and statistics appeared in several countries revealing that people of colour were more likely to be hospitalized and die from the virus.

There can be no peace without justice. Each one of us needs to do what we can.

On the United Nation’s website, we read: “We all have a role to play in fostering peace. And tackling racism is a crucial way to contribute….. We can work to dismantle the structures that entrench racism in our midst. We can support movements for equality and human rights everywhere. We can speak out against hate speech – both offline and online. We can promote anti-racism through education and reparatory justice.”

“We can work to dismantle the structures that entrench racism in our midst (Mauritius).”

How does Racism manifest itself in Mauritius?  Racism is surreptitiously practised in Mauritius. It is obscure and protean. It is the defense mechanism for fear of the ‘other’ and the fruit of a few centuries of pernicious intolerance and prejudice. It fills the air when people start their sentences with ‘dans nou…’ it pollutes the atmosphere when selection and recruitment is made in several quarters based on shadowy and mysterious criteria. Competences are often sacrificed for the sake of racism maintenance. It contaminates large sections of the population when people are made to feel undeserving and unworthy of certain rights and access to services like health, housing, education, social care to name a few.

Racism is a form of perverse spirituality in our midst. It is ingrained in the mindset of many and is part of the operating belief feeding ‘Negative Peace’. It is so easy to shift the blame to others. Integrity warrants that we acknowledge that most religions have had their share of racism maintenance and racism mindset promotion across History. We have sinned as we have allowed the advancement and diffusion of ‘structures that entrench racism in our midst’. This year’s call by the UN is an opportunity for all of us to become more aware of the derailment of our attitudes which are shaped by our beliefs. True spirituality is void of racism as it is grounded in and stems out from Love. The Love of our neighbour irrespective of the neighbour’s gamut of diversity is the beginning of the dismantling of the structures that entrench racism in our midst.

Let us build a better world, a better Mauritius – a world where we are eager to honour the Divine spirit in the Other. 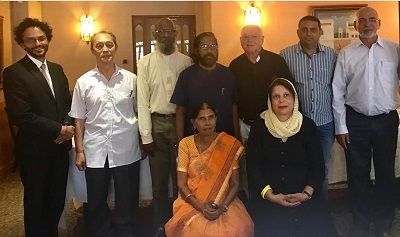 Thank you! Please check your email and confirm the newsletter subscription.